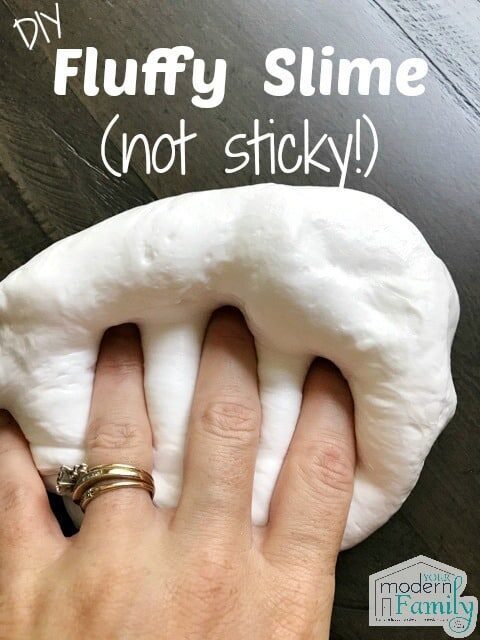 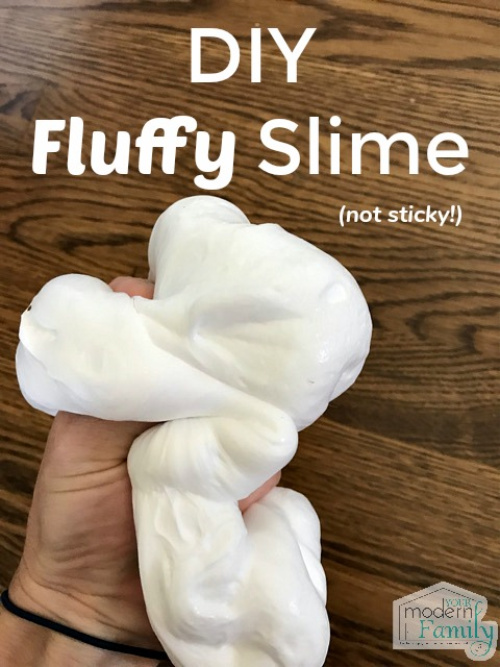 A few years ago, we tried our hands at non-sticky slime. After some tweaking and experimenting, we created the perfect fluffy slime recipe & we’ve been making (and sharing) it ever since. It’s the perfect way to add creativity and sensory play to their day while having fun playing with your kids!

How to Make Non-Sticky slime

It’s easier than you think!  If you haven’t made fluffy slime yet, you’re in for a treat! It’s such a blast, and the kids will love it.  They will play with it, stretch it, squish it, and have fun with this slime for hours.  It’s always on our “to-make” list when we want an easy and fun at-home activity that keeps everyone entertained.

How do you make Fluffy Slime?

Our kids have always wanted to make slime, but I wondered how to make slime less sticky… so we experimented until we came up with the perfect non-stick, homemade, fluffy slime recipe.  It was so much fun to make & it’s even more fun to use!

This fluffy slime recipe is an easy shaving cream slime that is a super-fluffy type of slime that isn’t sticky!   I’ve experimented with several different recipes when I wanted to figure out how to make slime without glue – thinking that keeping the glue away would keep the stickiness at bay.  However, I found that adding the glue did not make it sticky or messy!  It just holds it together well.

This is easy to make.  This slime is the perfect kid’s craft because the kids can create it with you in minutes and then play with the slime for hours!   Plus, it’s fun to join in on this craft!  You’ll love to play with slime after you make this fluffy slime recipe.  Trust me!

So, when we decided to make the slime, I knew I needed a non-sticky slime recipe.  I returned to my old science books (from when I taught elementary school) and found a recipe for a Shaving Cream fluffy slime.  I adapted it a bit.  It works nicely.

Note: These ingredients are NOT edible!

Before you begin, I want to remind you that this is a science experiment and should be handled as such.  Be safe and follow proper safety techniques.  I let our kids help (pouring, stirring, etc…), but the adult is ultimately responsible for making slime.
I also suggest that the adult handles measuring the Borax (sodium borate), as well as mixing the Borax with hot water, as boric acid & hot water can both be dangerous if misused.   Boric Acid is often used to make homemade laundry detergent, but it works well to make this homemade fluffy slime.

Step One: Mix the Tablespoon of Borax into the 1 cup of hot water and mix it until it dissolves.
Set it aside.

Step Three:  Add shaving cream.  You’ll want to mix in five cups of shaving cream (I use the cheap brand).  Gently stir this together until it is well-mixed.

Step Five:  Add three tablespoons of the borax solution to the shaving cream solution.
TIP:  Add 1 tablespoon at a time, mixing well after each addition.

Final Step: Mix it until it no longer sticks to the sides.

Optional: If you want to change it up a bit, you can add food coloring at the end and knead it in.  You can add it to the entire batch of fluffy slime, or you can separate it.  You could make pink, blue, orange, and even unicorn slime, but the kids didn’t want to add any food coloring to our slime. They thought it looked like a cloud when it was white.  Plus, I think that would take away the “non-mess” part of this activity.  Food coloring is always messy in our house.  lol!
You can also make glitter slime by adding some glitter to the slime once you are in the final mixing stage.

Our kids played with their fluffy slime for HOURS!   They got out pots & pans and pretended that it was food (it was easy to ‘cut’).  They put it into different containers and watched as it molded to the container shape.

It was pulled, smushed, and squished it into cups while the kids listened to the funny sounds it would make.   The slime was stretched as far as our kids could stretch it before watching it break.  Then, they’d knead it & start again!

Can you store fluffy slime?

Yes, you can, but it will lose its “FLUFF” and become more like regular slime.   Our kids could still play with it & re-use it the following day and for several days afterward because they didn’t mind that it was more like normal slime.

How do you fix fluffy slime that is sticky?

There may be a time when your fluffy slime feels sticky.  That’s ok.  It’s easy to fix!  Just add more contact solution!

If you find that the slime still feels a bit sticky, just add about 1/4 of a teaspoon of contact solution.   Mix this well by kneading the slime, stretching the slime, kneading it some more, etc…  Do this for about 2 minutes.  The saline solution is going to take away the sticky feeling.  If it is still sticky, repeat the process.

TIP: When fixing sticky slime, be sure only to add 1/4 t. at a time, or you risk making the slime too hard.  If it becomes too hard, it loses its elasticity and isn’t as fun to use.  Then, when the kids go to stretch it or pull it, it just breaks apart.

Slime requires an activating ingredient.  This is what will turn your slime from a slimy gluey mess into the solid-formed slime that it becomes once it has been mixed. If you prefer not to use a laundry booster, we have a few alternatives that I’ll link below with our Amazon affiliate links.  They can also be purchased at most stores or pharmacies.

NOTE: Almost all slime recipes (even ‘non-borax slime) calling for “contact solution” or “saline solution” will contain sodium borate (Borax).   The Sodium borate is already in the saline solution, so it does remove the step of making the solution yourself, which helps you to avoid touching the Borax.

Here are some “Borax Alternatives” for slime, although our favorite one is the contact solution.

To make fluffy slime without Borax

If you choose to use a contact solution that already contains Borax, such as Renu Fresh Contact Lens Solution, it’s simple.
To make this fluffy slime without Borax:

You can play around with the ingredients a bit, adding more shaving cream, etc… until you find the perfect consistency for you.

1. If the thought of a mess stops you from crafting, just remember always to use a tablecloth when you are making the craft (Tip: Stock up on the really cheap tablecloths at the dollar store.  Then you can just toss them after you finish a craft or activity.

2. Grab a mop & a wash rag to keep close by while making slime.   This way, if glue, glitter, or drops of food coloring make their way onto the floor, you can immediately wipe it away.

… and a few DIY ideas to keep things Mess-Free!

© YourModernFamily.com. Content and photographs are copyright protected. Sharing of this article is encouraged and appreciated, copying and/or pasting articles to any social media is strictly prohibited.
16.8K shares 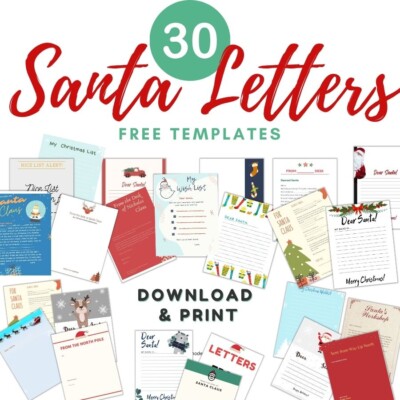 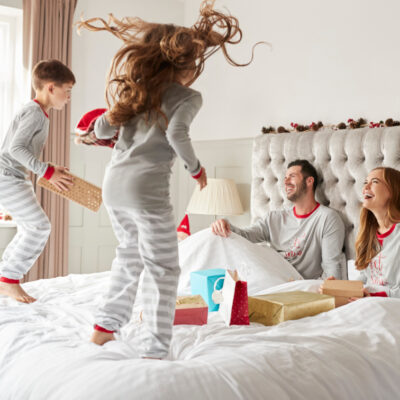